How to search?
advanced search 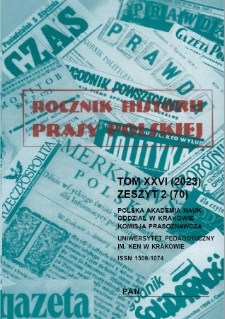 The purpose of the study is a synthetic presentation of the development of children’s magazines in Poland from their creation to the end of World War I. The main focus of interest and research are magazines for younger and older children (up to 15 years of age) published in the Polish language across the ethnic and historical Polish territories. Periodicals published in this area in other languages (German, Russian, Belorussian, Ukrainian, Lithuanian, Yiddish, and Hebrew), one-days and calendars, school magazines, scouting and ethical magazines, and of course youth and student press were omitted. In the course of the research, it is established that 177 titles addressed to young recipients appeared in the examined period, 25 of which were published in the years 1824–1863, and 152 in the subsequent period.

In paper was presented a publishing history of two Lithuanian periodicals from the beginning of 19-th century — Dziennik Wileński [Vilnius Journal], published between 1805–1806 and Gazeta Literacka Wileńska [Literary Magazine of Vilnius], issued from January until December 1806. Both publishing projects were connected with the name of their editor — Gotfryd Ernest Groddeck who brought into existence the first from mentioned journals as the literary counterbalance to Dziennik which was focused mainly on science. Unfortunately, lasting year competition brought them about finish of their issuing.

The second part of this article examines the content of the main sections of the weekly magazine Przyjaciel Dzieci [The Children’s Friend] (1892–1911), i.e. popular science; travel, geographical and ethnographical materials; biography; a section called “teaching actions”; and religion. Also covered are miscellanea, practical tips, puzzles and cartoons, as well as new sections “About the World” and “Educational Games and Entertainment”. Finally, the article looks at a review published by Poradnik dla Czytających Książki [A Guide for Book Readers] in 1901, whose author claims that some of the information in Przyjaciel Dzieci is outdated or obsolete.

This article surveys the relations between the Polish Radio and the German Broadcasting Corporation (Reichs-Rundfunk-Gesellschaft) in the interwar period. In its early phase the relationship was overshadowed by disputes over programmes on Upper Silesia and the takeover by a German company of the radio station in the Free City of Gdańsk (Danzig). After Hitler became chancellor in 1933 there was a marked improve- ment in relations: the two parties even made an agreement to relay each other's programmes. However, in September 1939 the German radio network (RRG) actively aided the German army in its invasion of Poland.

This article looks at the history and contents of the quarterly Dawna Sztuka [Old Art] published in Lwów in (1938–1939), dedicated to the history of art and archaeology. Founded by Professor Stanisław Jan Gąsiorowski, the periodical was intended, among others, as a platform for establishing ties with researchers from abroad and presenting the work of Polish archaeologists and art historians to the academic community and readers all over the world.

The main purpose of the publication is to determine what knowledge was available to Polish women about the situation of women and feminist organizations in Europe and on other continents? What picture of the activities of these organizations was presented by the Women’s League press bodies? By using the classic method of analyzing and criticizing the content of the press, and as an auxiliary methodology of monographic research, it was possible to find answers to these and similar questions. Studies have shown, among others what role such organizations as the Democratic Committee of Bulgarian Women and the Democratic Union of Finnish Women played in the emancipation processes.

The assassination of the Mayor of Gdańsk Paweł Adamowicz in Poland’s leading national newspapers, This article compares the coverage of the incident in six print dailies (Gazeta Wyborcza, Rzeczpospolita, Nasz Dziennik, Gazeta Polska Codziennie, and two tabloids Fakt and Super Express) over a period of two weeks (14–26/27 January). Their presentation of the story differed considerably. There were marked differences not only in the total amount of space the individual papers devoted to the Adamowicz’s murder and its fallout, but also the way they selected, described and interpreted various points, and sought to contextualize it by introducing additional themes.

Michał Rogoż
9 A Report on the work of the Commission of Press Studies of the Cracow Branch of the Polish Academy of Sciences in 2019
Jolanta Chwastyk-Kowalczyk
Rocznik Historii Prasy Polskiej | 2020 | t. 23 | No 1 | 137-139
Download PDF Download RIS Download Bibtex

To subscribe to the magazine enter the email address:

*Fields marked with an asterisk are mandatory to be filled in and checked. To Subscribe to the journal you must agree to the processing of personal data.

A message has been sent to your email address. Check your mailbox
and confirm subscriptions to the magazine.
Thank you.